Plot: A college professor discusses the psychology of fear with his students by telling them a few scary stories. 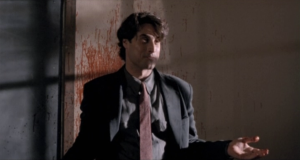 First story:  The Old Dark House – A couple gets stranded on a dark road and a big surprise is coming to them.  DJ said that this is the reason he doesn’t like surprises.

Third story:  All Night Operator – A telephone operator gets really creepy phone calls from a stranger.  It’s sort of a “When A Stranger Calls” like story, but we think this ending is cooler.  This was our favorite story of the three.

The wraparound story, Allison’s story, unfortunately sucked.  They gave us a few decent horror stories and then they tie them together with bullshit.  It’s a shame.  It would have received a higher score if it was done more successfully.

It was a decent movie.  Nothing spectacular, but worth a watch if you have some time to kill.