Plot: it’s a series of stories that weave into one another in a fantastic way (don’t worry, it is not confusing at all so long as you’re paying attention) 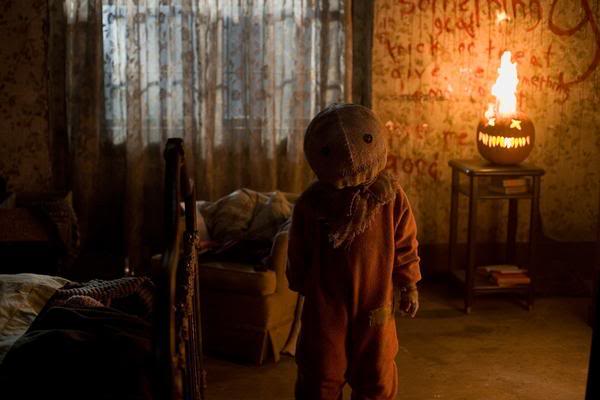 I’ve already used the word fantastic to describe the plot, so you probably already know that I enjoyed this movie.  And DJ enjoyed it, too.  There could have been some more hot guys to even out the number of sexy girls, but I forgive them.  Horror movies are what they are.

Trick ‘r Treat follows the cutest little killer ever in a movie, Sam.  Sam walks around in a burlap type mask over a really rounded head.  It’s Halloween and he’s carrying a sack of something and he’s bringing comeuppances, too.  It’s good.  It’s all good.  No story is a miss. It’s original.  Crafty.  It follows the rules it lays out.  There are the guilty and there are the innocent and everything plays out exactly as it should.

The stories involve 1) Leslie Bibb, who blows out a Jack O’Lantern against her hot, Battlestar Gallactica husband’s warning and pays for it.  2) Dylan Baker, a rather sick ‘Principal Wilkins’, who enjoys poisoning children and then carving their heads with his young son, then going out to kill people a little bit older.  3) Anna Paquin, who’s a “virgin” and her slutty friends who turn out to be more than men – including Principal Wilkins – were expecting.  4) Several kids who decide to prank a weird girl named Rhonda by telling her a scary tale about 8 weird kids who’s parents paid their bus driver to drown them.  Of course that backfires horribly. 5) And lastly, there’s one about a crotchety old man who steals candy from kids and gets a much needed visit from Sam and then some other even more unwelcome guests arrive because the old man has been keeping some heinous secrets.

You should trust me when I tell you that this is an impressive piece of work.  It’s fun to watch, there’s incredible innovation, a magnificent cast, awesome effects, a nice soundtrack and a killer beginning and end.