Plot: a pair of office workers get trapped in an elevator on Valentine’s Day, but what starts off as a romantic connection soon becomes a fight for survival

Happy Valentine’s Day!!!  So says Hulu.  This is their 5th Into the Dark movie and we have only been impressed by one so far and this wasn’t it.  This movie follows two co-workers that start getting cozy after becoming trapped in an elevator together over a long Valentine’s Day weekend.  It starts with some wine and some Hershey’s Kisses and soon ends in a sexy conversation which leads to a sexy time.

Matt Lauria and Natalie Martinez are both very attractive people so sexy time couldn’t get much sexier.  You get to see his butt, but no boobs.  Damn.  The thing is, the whole time they’re together, Guy (Lauria) thinks they’re a match made in heaven, while Jennifer (Martinez) is convinced that even though there’s chemistry between her and Guy, she should really go back to her ex that was apparently a big fat liar.  So, even before the big reveal comes, we didn’t like Jennifer much because she was stupid.

And now you should stop reading if you don’t want the end spoiled because I’m going to spoil the hell out of it. 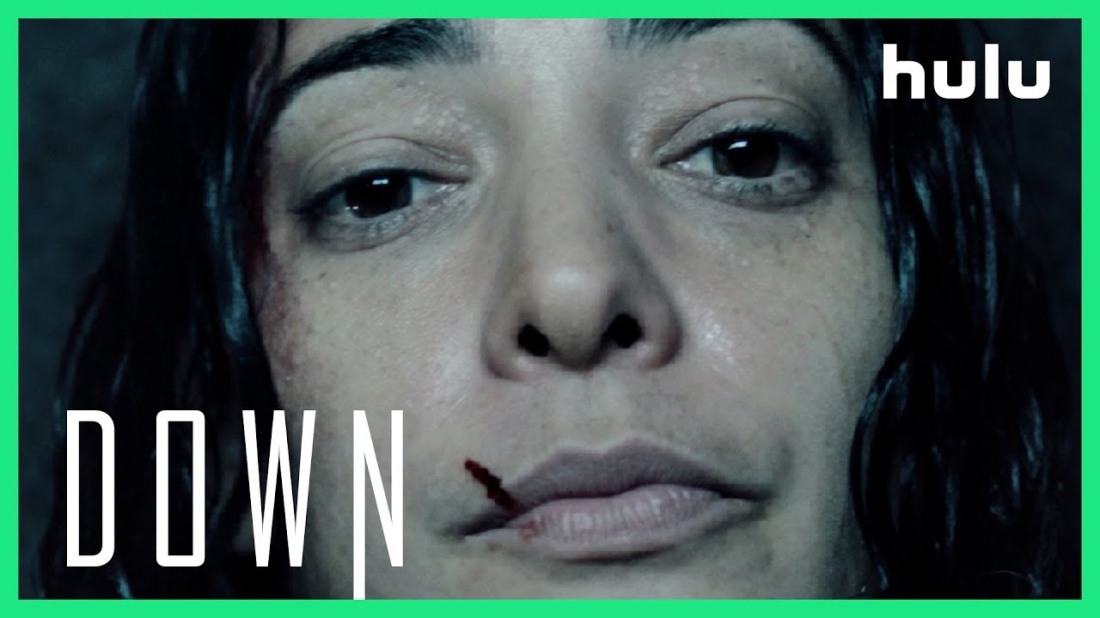 Guy is fucking disturbed!  As a matter of fact, his name isn’t Guy at all, but John.  And he knows all about Jennifer, including her last name and the name of her ex-boyfriend.  He’s been watching her see.  And he’s not an accountant, he’s the building’s security guard and he just feels so ignored that he trapped them in the elevator on purpose.  He’s even been to jail before.  My god, how simple it is to realize that he’s going to be the weird one.

Jennifer, however, like we said before is really stupid.  And not just because she wants to go back to her lying ex.  See, she has the ability to get out of the elevator on more than one ocassion, but she fucks it up by telling him that she’s gonna call the cops on him and have him put away and giving him the middle finger.  It’s like honey, fucking lie to him until you get out of there, then call the cops when you’re far away.  How hard is that?

It was so unrealistic as well.  The way they slam each other around in that elevator you’d think they’d be more banged up then they were by the end.  There were no rules and it was very predictable.  And although it technically had a “good ending” it was such bullshit that we didn’t even care.  And the only person we saw that we liked was Eddie, the other security guard, and John kills him.  Quickly, and nastily.

Points for the innovation and the acting and for Eddie.  But we do not recommend this Into the Dark episode.