Plot: a group of teens attempting to rescue their friend from an evil corporation inadvertently release a bunch of zombies.

Charlie (Coyote) goes to Chernobyl to get the last of the barrels from the Russian government.  Not sure how or why he ended up in this movie, but lets push past that.  Things go wrong while he’s picking them up.  And although he gets the canisters, people die along the way.

Fast forward a little bit and Charlie’s nephew, Julian (Keefe) and his little brother live with their uncle because their parents died in some horrible car accident.  For some reason, this doesn’t stop Julian or his friends being stupid on motorbikes and one of them, Zeke (Dandel), ends up doing a trick that lands him unconscious.  Well, instead of being taken to a hospital, he’s taken to Hybra Tech, where Julian’s Uncle Charlie works.  Also, Julian’s friend Katie (Kramer), works there as a security guard.  Yes, a 100lb soaking wet little teenager works at a big evil corporation as one of it’s only security guards.  Whatever.

Anyway, doing a little research, the kids decide that Uncle Charlie is lying to them and that Hybra Tech may be doing test on humans.  So, they decide to bust Zeke out of there.  Katie helps them from the inside, but once in, they are caught by Uncle Charlie, find zombies, accidentally release said zombies and have to bop there way back out. 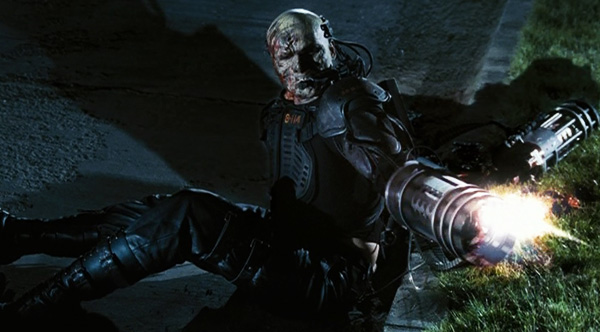 This movie is funny all the way through, but not when it’s supposed to be.  Like there’s three different montages and two of them are dirt bike montages.  Also, the writing is ridiculous.  How do two teenage boys just know how to repel down the side of a virtual skyscraper?  There are also far too many fist fights with zombies.  And I mean fist fights.  Where the zombies actually put up their dukes and swing it out with a living person instead of just eating their damn brains.  Ugh.

There’s also late reactions to gunfire, no reactions to gunfire, people falling down without actually being shot, and zombies falling like old people after being shot (like really slowly, knees hitting the ground first, then falling sideways like they’re bracing themselves).  Honestly, it’s a very fun movie to watch because it’s just so silly.  It’s rewatchable purely for shits and giggles.